You’ve probably heard the term “encryption” used a lot recently, even on the evening news. While you may think encryption is only something that tech experts use, you actually use it yourself every day.

Let’s look at what encryption actually is, what it does, and why it’s important.

Simply put, encryption is the act of encoding information so that only authorized parties are able to view it. Let’s take an offline example to illustrate.

Say Adam writes a message on a piece of paper and tries to hand it to Carol. If Dan snatches the paper during the transfer between Adam and Carol, Dan will be able to fully read it. This is a problem if there was sensitive information like a password on the paper.

Now, imagine that Adam and Carol have a secret code that nobody else knows. Before Adam hands the paper over, he uses their code to write a disguised message, resulting in it looking like nonsense to anyone who doesn’t know the code. If Dan steals the paper in this case, he can’t decipher what it says.

This is the same idea as encryption, though modern encryption adds a few more balances to keep it secure. When you enter your credit card number to pay for something on a website, your browser doesn’t just send the credit card number in plain text. It first encrypts it so that only the website can read it. If someone stole the information in transmission, it would be unintelligible to them.

For an extremely basic (and insecure) example of encryption, see the below image of encoding “Hello” with the ROT13 cypher. This scheme simply swaps each character for its inverse (13 letters ahead), making it trivial to encode and decode. 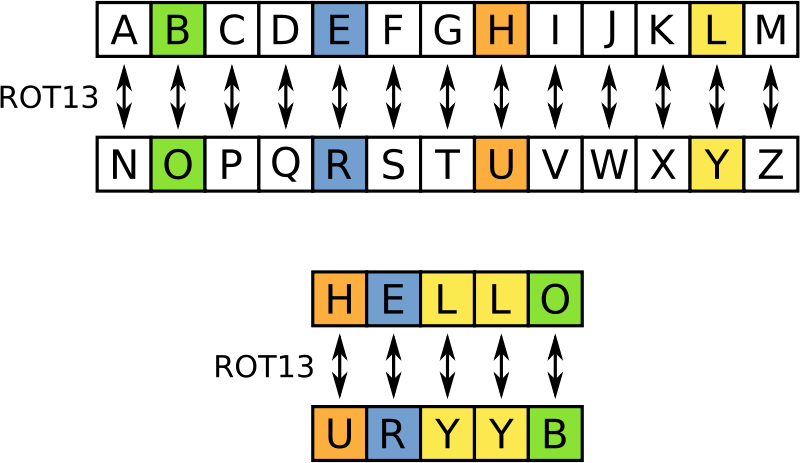 Encryption might sound complicated, but you’re probably using it every day without knowing. The following are all uses of encryption:

The Safety of Encryption

You’ll hear a lot about discussions about encryption on the news, but the truth is that encryption isn’t good or bad—it’s simply a standard that allows anyone to protect information from prying eyes.

In a pefect setting, encryption is basically unbreakable. If something is properly encrypted, only the parties intended to read it will be able to decipher the code. But there are a few ways that encryption can be compromised.

One of these is a backdoor. This is a secondary method, usually secret, used to access encrypted data. For example, if a company that developed a secure messaging app added a backdoor to it, they would be able to look at your messages anytime they wanted.

Poor encryption can also crack fairly quickly. An example of this is the outdated WEP protocol for securing wireless networks. While it is a form of encryption, its weaknesses are so widely known that a network using WEP is not considered secure.

Aside from these, brute force (guessing every possible combination one-by-one) is really the only way to break encyrption. However, most modern encryption schemes are so strong that this isn’t a concern. For instance, using the minimum 128-bit keys of most methods, you’d have to test 2^218 possible keys to crack the encryption. This would take the most powerful supercomputers in the world over a million years to guess.

Now you know a little more about encryption and how it protects data every day. It’s a vital part of how modern technology works, and helps keep information away from people who have no business with it.