We’ve seen advancements in virtual reality technology over the past several years that were never thought possible. And while you might think of this technology as something primarily for video games and other casual activities, the business applications are really exciting.

Microsoft recently announced the second generation of its HoloLens mixed reality glasses. Let’s take a look at what these are and the many ways they could change the landscape of business.

What Is Mixed Reality?

Microsoft refers to the HoloLens as “mixed reality” technology. In case you’re not sure what this means, let’s break down three similar terms: virtual reality, augmented reality, and mixed reality:

In short, when wearing Microsoft’s HoloLens headset, you’ll see new virtual objects floating around that you can interact with. It doesn’t totally replace the real world like virtual reality, but offers more interactivity than augmented reality.

Microsoft started shipping the pre-production edition of the original HoloLens glasses in 2016. However, it never released a version aimed at consumers. HoloLens 2, announced in February 2019, is much different. With this edition, Microsoft is specifically targeting business use.

The new headset is more comfortable, more technically impressive, and displays the holograms much better than its predecessor. It will sell for $3,500.

But we aren’t worried about the technical details—the draw is what opportunities the HoloLens headset presents for transforming business.

HoloLens in Business Use

The possibilities for HoloLens and mixed reality are incredible. Let’s look at some scenarios that this could transform. 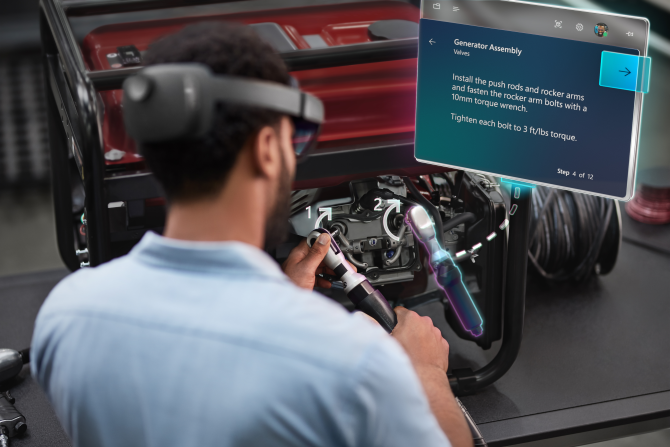 Imagine a technician working to repair an unfamiliar piece of machinery and not having to stop to reference any instructions. With the HoloLens headset, they could follow a step-by-step guide to repairing the issue. This would even help them through which tool to select and where to use it.

This could go beyond experienced technicians, too. Even someone with relatively low mechanical skill could walk through basic fixes using clear instructions loaded into the headset.

HoloLens supports arrows that can guide users to wherever you’d like them to go. This could allow guests to navigate to the right place in your building without needing someone to come along with them. It could also help new employees get acquainted with the layout of your building faster. 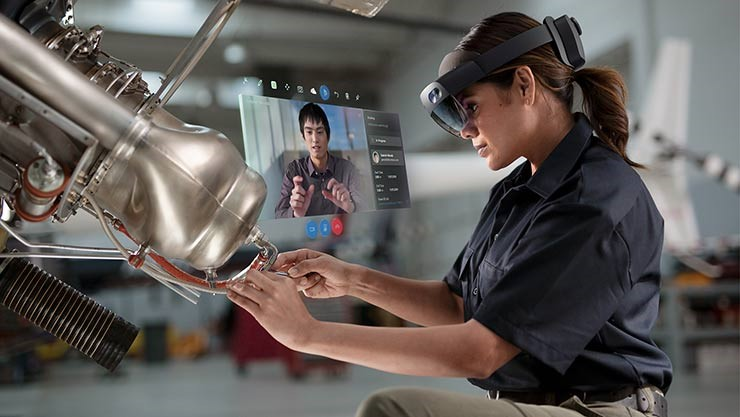 As you probably know, different employees of our company are on-site at various clients throughout the week. We keep detailed notes in order to keep everyone up-to-date about specific IT setups and other important information.

With HoloLens, we could virtualize all of this. It would be possible to place a hologram in a room listing information on each server and details about that client’s setup. We could also provide directions to hard-to-find assets, like switches.

This could expand to any line of work, of course. Employees who work on different halves of the week could leave notes for their counterpart at their desk. The possibilities of holographic notes are huge.

HoloLens includes support for video calls that allow the caller to see exactly what the person wearing the headset is looking at. This would make it much easier to get help from someone else when looking at a circuit breaker, piece of machinery, or similar issue that’s difficult to explain in words.

Even cooler, the person connected to the call (not using the headset) can use an app to circle an item they see. These circles show up as holographs on the wearer’s display, allowing you to say “tighten this bolt” and show exactly what you mean.

Having a live feed of what someone else can see, instead of working off pictures or similar, could transform remote help.

These are just a few of the many amazing possibilities HoloLens could bring to business. It’s easy to dream up more:

HoloLens Could Be the Future

Mixed reality and HoloLens are exciting looks into the future of how virtual reality technology can revolutionize the world of business. No matter what industry you’re in, you can find some application for this technology. This might be leaving virtual notes, remote assistance, providing directions, or providing an in-depth walkthrough of a process.

As these headsets drop in price and the technology becomes even more powerful, we’ll see even more amazing uses for it. It’s an exciting time for innovation!