Since water causes serious damage to electronics, manufacturers have started coming up with ways to protect our mobile devices from getting wet. However, the terminology in this area is often confusing.

We’ll explain the difference between waterproof and water-resistant, how to interpret the values thrown around in these discussions, and other important facets of water resistance.

What Do Waterproof and Water-Resistant Mean?

The first area of confusion with water protection is that very few objects are truly waterproof. If something is waterproof, it means that it’s impossible for water to enter the device under any condition. Water-resistant, meanwhile, means that an item has some protection against water, but it’s not perfect.

You’re probably familiar with this distinction from non-electronic devices. For example, it’s not a big deal if you splash a little water on your watch, but swimming with it or leaving it out in the rain overnight would damage it.

You should be suspicious if you hear “waterproof” thrown around vaguely as a marketing term. Reputable manufacturers will state that the device is water-resistant with certain values and conditions, which we’ll examine next. If you don’t see any official ratings for water resistance, the company likely has not tested the device against any trusted standards.

There are two main values to know for water resistance: ATM and IP.

ATM stands for standard atmosphere, a measure of pressure. One ATM is roughly equal to the pressure at sea level. Every 10 meters (about 33 feet) below the surface of water adds one additional atmosphere of pressure.

On a wearable, this value tells you how much water pressure the watch can resist. For example, a value of 5 ATM means the device is protected up to 50 meters (about 164 feet) of depth. However, there are a few important points to keep in mind before you go diving with your smartwatch.

Most importantly, the tests conducted to find these ratings are performed in still water. In actual conditions (such as jumping into a pool or falling off a water ski) water moves, which can drastically change the level of pressure.

For instance, a device rated at 3 ATM might be safe from a quick drop in your sink. But this rating wouldn’t protect it from being sprayed with a high-pressure hose.

You should also know that there is no universal standard for ATM testing, so you must take those ratings with a grain of salt.

Finally, these numbers only account for fresh water. Dropping your device in juice, a muddy puddle, or other mixed environments will have different results.

The other major water resistance standard are IP (Ingress Protection) codes. These are typically used for smartphones, because they measure resistance against other forms of intrusion, not just water.

Unlike ATMs, the IP rating is an official standard handled by the International Electrotechnical Commission (IEC). If a phone has an IP rating, it doesn’t need an ATM rating because the former is more specific.

IP codes come in the form of IPXY, where the first digit is the protection against solid particles (even from larger objects, like human fingers) and the second is the device’s water resistance. The first digit ranges from 0 to 6, while the second can have 0 protection up to a maximum of 9.

Most smartphones today meet the highest level of protection from physical ingress (the first value) of 6. This means that the internals of the device are completely protected from dust entering. See the below table from Wikipedia for more information on these ratings. For smartphones, anything lower than 5 is pretty much irrelevant, since physical objects can’t enter a phone. 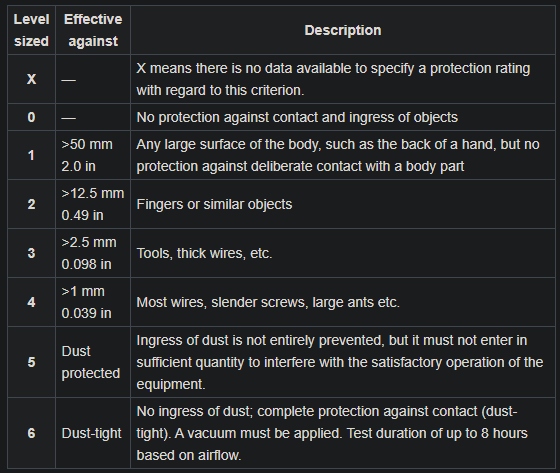 The second digit describes the liquid ingress protection of the device. Details on this can be found on the IP Code Wikipedia Page; they cover protection from various sources of water ranging from drips to high-powered sprays. The most important liquid resistance values for smartphones are the 7 and 8 ratings.

IPx7 indicates that submerging the device in up to 1 meter (3.3 feet) of water for 30 minutes will cause no damage. Meanwhile, an IPx8 rating indicates that a device can withstand immersion in over 1 meter of water “under conditions which shall be specified by the manufacturer.”

Most high-end smartphones today, including the iPhone 11 and iPhone 11 Pro, have a rating of IP68. This means the phone is completely resistant to dust and can survive a dunk in water for a short time.

For an idea of how this has changed over time, have a look at the IP ratings of recent iPhone models:

For more comparison, here are some Android phone IP ratings from the past few years:

Now you know what the numbers associated with water resistance mean.

As far as the actual process of water resistance, this requires several steps inside the phone to protect it from water intrusions. These include glue-like seals to keep everything inside the device airtight from outside debris. Rubber gaskets seal the gaps around ports and switches on the phone, where water could otherwise get in.

Because water resistance depends on sealing, pressing a button while underwater could break the seal and let water in. The sealant could also get worn out over time as a device ages.

While it’s wise to know what your devices are rated for, it’s more important to remember that water resistance is designed as a protection, not an active feature.

Apple has an entire page on waterproofing, including what you shouldn’t do with a waterproof iPhone. Even though your phone can probably take it, you shouldn’t intentionally put your phone in the bath or pool. Apple’s instructions also discuss the importance of waiting for your phone to dry before connecting any cables or trying to charge it.

If your phone is water-resistant, treat that as a failsafe for if you drop it in water briefly. Nearly all manufacturers exclude liquid damage from their warranties, so you’ll be out of luck if your water destroys your phone.

Keep Your Devices Safe From Water

In the end, no electronic device is fully waterproof. For that to be true, it would have to be safe to take deep-sea diving or leave in water for days. But the water resistance of most smartphones today is a handy feature that will often save your device from a dunk.

For more facts about your phone, have a look at our discussion about iPhone viruses.