Most people have heard of the blue screen of death, and if you’ve used Windows, chances are that you’ve seen one yourself. While it’s hopefully not a common occurrence for you to deal with these, it’s useful to know what they are and what you can learn from them.

Let’s take an introductory look at the Windows blue screen of death to demystify this important part of the OS.

What Is a Blue Screen of Death?

A blue screen of death, or BSOD for short, is the informal name for an error in Windows that’s officially called a stop error. It got this popular moniker due to the blue background and white text that appears on the screen when it occurs. While it is a serious error, it doesn’t mean that a computer has “died”.

A stop error has this name for a reason: it refers to a problem major enough that the operating system has to shut down to prevent damage to the system. On other operating systems, like Mac and Linux, the equivalent error is called a “kernel panic”.

These errors have been around since the early days of Windows, but they used to be a lot less friendly. Early BSODs were full of technical information that wasn’t useful to the average user.

Starting with Windows 8, Microsoft changed the blue screen. It now says “Your PC ran into a problem and needs to restart” and includes a sad emoticon, a QR code you can scan for more info, and a simple error code that’s easy to look up if you need to troubleshoot further. The company experimented with changing the color in Windows 11, but it’s blue again in the latest versions.

Why Does a Blue Screen of Death Appear?

A blue screen usually happens when Windows runs into a problem with either a driver or a piece of hardware. Because BSODs are low-level crashes, they cause Windows bigger problems than an app like your browser or Microsoft Word crashing.

If you’re not familiar, drivers are special pieces of software that allow your computer to interface with the various devices connected to it. For example, when you start using a new printer, your computer needs to install the right driver or it won’t be able to use that printer.

Blue screens can appear for many reasons, including the following:

Because a BSOD can occur from different circumstances, the best way to figure out what’s going wrong is to note the error that appears on your blue screen. 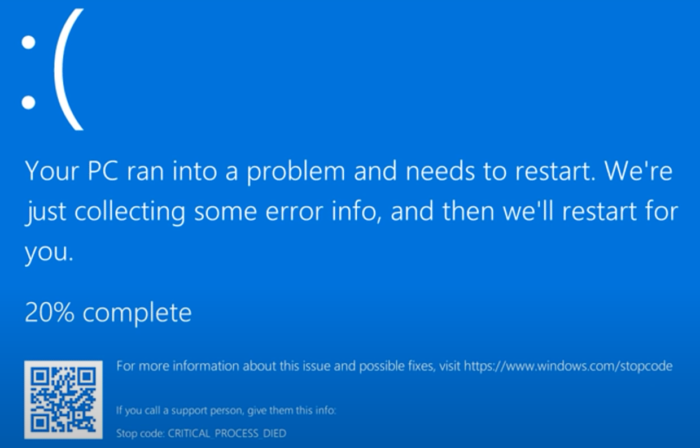 On modern versions of Windows, you’ll see a line like this:

If you call a support person, give them this info:

Keep note of this problem, then you can Google it, or give it your IT staff, for more details.

Basic Troubleshooting for a Blue Screen of Death

Sometimes, a blue screen error appears one time but isn’t an issue afterward, as your computer applies an automatic fix. If this happens, you shouldn’t worry about the issue as it was likely a one-time hiccup.

However, if the BSOD continues, you should go through some basic troubleshooting. Since fixes vary greatly depending on the specific error, we’ll focus on a few high-level fixes you can apply in lots of situations.

First, think about any hardware you’ve connected to your PC recently. Disconnect any new devices like USB storage devices, printers, and speakers. If the issue goes away, your problem is likely related to that hardware; it might not be compatible with your version of Windows.

If you’ve recently updated a driver or installed a piece of software, that could be the cause. Try undoing any changes you’ve done recently and see if the error continues.

It’s also possible that your computer hardware is failing. For instance, the DATA_BUS_ERROR message mentioned above usually means that your computer RAM is going bad. Certain apps, both from the manufacturer and third-party, will let you scan your hardware for problems.

BSODs: Not Fun, but Hopefully Rare

We’ve gone over the fundamentals of the blue screen of death, which is a staple of Windows. You’ll see this error screen when Windows hits a problem that it can’t fix safely without shutting down. If keeps happening, think about what you’ve changed on your computer recently or consider testing your hardware for failure.

If you see frequent errors on your machine, that might be a sign it’s time to replace your PC.